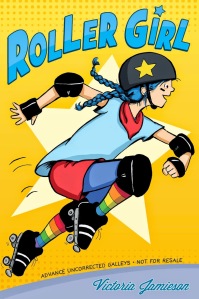 It took a while for me to get into graphic novels. Beyond Simpsons comics and the strange middle-of-a-storyline ones you got in showbags, I didn’t read them much as a kid. (I was too busy going to the library and borrowing the same twenty books over and over again in an infinite rereading cycle.) It took until I was about nineteen, and started dating this guy who was into comics and drawing and music that wasn’t pop, and he introduced me to his collection, then good comic book shops in the city. I liked some superhero stuff, but what really turned out to float my boat was autobiographical comics, or ones that talked about small-scale life stuff in a big visual way.

Roller Girl is like that. It’s the vibrant story of a girl who is testing the boundaries of her friendships during summer camp, that enthralling American concept where you can have a super niche interest and go and spend six weeks indulging in it. Astrid and her best friend, Nicole, are taken on a cultural adventure by Astrid’s mother to watch a roller derby bout. These fierce, colourful women speed and thump and crash their way through a bout, and at the end, Astrid is in love. She can’t skate and has none of the gear, but that doesn’t stop her from declaring that she and Nicole are signing up for roller derby camp. When it turns out that Nicole is more interested in dance camp, along with their low-level nemesis Rachel, Astrid feels betrayed. Not only that, but her own body betrays her when skating and roller derby ain’t as easy as it seems. Now she’s keeping secrets, falling over, and on her own. Can she use the summer to toughen up both the butt she’s constantly falling on and the heart she needs to fix?

Roller Girl is a pacy, knock-em-around graphic novel of friendship, colourful hair and even more colourful bruises, and totally worth a read.

I’m Fiona, and I work in a bookshop and write stories, like How to Make a Movie in 12 Days, which is about kids making a horror movie on their school holidays, and is available now at your friendly neighbourhood bookshop or library! I’m also a big fan of the three Rs: Readings, Writing, and Really Vast Amounts of Popcorn at the Movies.