Brian Selznick and David Serlin’s Baby Monkey, Private Eye is one of the sneakiest books around. Not just because it’s about a private detective – Baby Monkey doesn’t really do sneaking, since he is a baby – but because it’s thick, but also, it’s super easy to read. The Rocket, who’s five and is just learning to read, covered a chapter a night for five nights and then the whole thing was done, but it’s heavy and thick enough to scare off any five-year-olds who aren’t bullied *cough* eased into reading books by their bookseller mothers. It’s got 190 pages and an index. But if you were about ten and a good reader and you picked it up, you’d have the whole thing finished in five minutes. 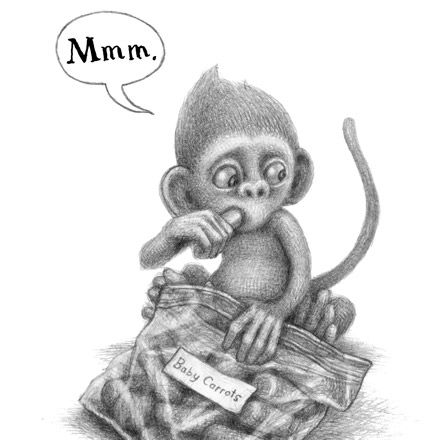 Baby Monkey starts each chapter sitting in his freshly decorated detective’s office reading a book. Then someone comes in – a tiger, an astronaut – and says, “Baby Monkey, someone has stolen my [very important thing]!” Baby Monkey takes the case on. He has a snack, spends ten pages trying to put on his pants (pants are very complicated if you are a baby that is also a monkey), follows the tracks and solves the case. Hurrah! Good work, baby monkey. But there are also other things going on. Baby Monkey has layers. It is a good book if you are learning how to read, because the writing is VERY BIG and the chapters are short. It’s also pretty funny. It’s also very clever and full of clues, in a way that is a bit for adults, because there are different things in his office in each chapter that gives you clues about the case. Some are obvious, like how there is a poster for a circus in the chapter where a clown needs help. Some are very obscure, like when an opera singer comes in with a case and there is a picture of Marian Anderson, who was an opera singer in the last century and who I had never heard of, but then the reason that is sneaky is because I will probably end up looking her up in a minute. (Update: I did, and WOW, she is super interesting!) It helps that there is a very helpful Key in the back of the book which explains all the things in Baby Monkey’s office each time.

Baby Monkey, Private Eye is a very good book for many different ages and many different reasons, and Selznick’s The Invention of Hugo Cabret is also very wonderful, which makes me realise I haven’t even mentioned how beautiful the drawings are, even though Selznick is known for his amazing detailed drawings. He and Serlin are a great team, and Baby Monkey is a heap of fun.

I’m Fiona, and I work in a bookshop and write stories, like How to Make a Movie in 12 Days, which is about kids making a horror movie on their school holidays and is available now at your friendly neighbourhood bookshop or library, and How to Write the Soundtrack to Your Life, about a shy music lover who has her songs stolen–and can’t prove they were hers! I’m also a big fan of the three Rs: Readings, Writing, and Really Vast Amounts of Popcorn at the Movies.